What is an API? How APIs work, simply explained 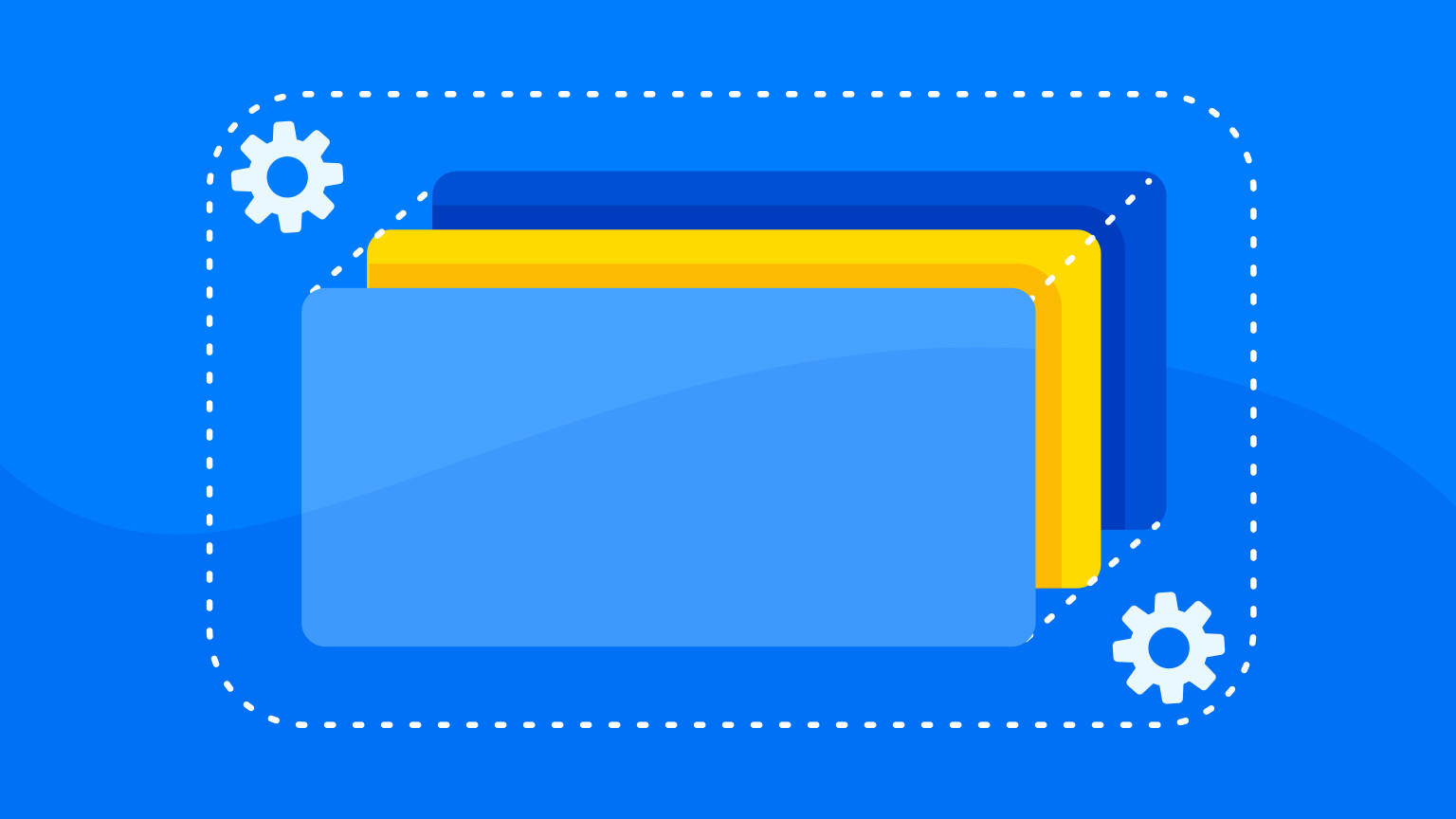 “API? What’s API?” For the non-technical folks out there, you’ve probably heard this unfamiliar acronym dropped into conversations or tweets around software development and web services.

Ask anyone here at Contentful, and we’ll talk about APIs with a great deal of enthusiasm, simply because this technology is the cornerstone of our content platform. But before we get ahead of ourselves and start rambling about things like microservices and API calls, let’s establish a common understanding of what an API is and how they work.

This post will provide a definition of what API stands for, take a look at different types of API, and provide some examples of APIs in action. Ready to dive in? Let’s go!

An API is an Application Programming Interface

API stands for “Application Programming Interface,” which is a way to communicate between different software services. Different types of APIs are used in programming hardware and software, including operating systemAPIs, remote APIs and web APIs.

A web API or web service API is a set of tools that allow developers to send and receive instructions and data between a web server and a web browser — usually in JSON format — to build applications. Read more about JSON on MDN. Interesting to note is that all web services are APIs, but not all APIs are web services.

If you’ve read the Contentful docs, you’ll also have seen that we provide a multitude of public APIs: a REST API and a GraphQL API to access and manage your content, and more.

According to no less an authority than Amazon, REST APIs are some of the most popular and flexible APIs found on the web today (and we agree 100%). Short for Representational State Transfer, the client sends requests to the server as data. The server uses this client input to execute internal functions and returns output data back to the client.

To consider how APIs work in ordinary life, let’s look at a typical use case: how APIs are involved in delivering blog posts.

This post will cover the fundamentals of what makes an API and how APIs communicate over the internet. But first, let’s take a look at the history of where it all began.

What was the first Application Programming Interface?

Did you know that application programming interfaces actually predate the existence of the world wide web?

The concept of APIs has been around since the evolution of the first computers in 1940, when British computer scientists Marice Wilkes and David Wheeler worked on a software library for the Electronic Delay Storage Automatic Calculator (EDSAC).

The EDSAC was programmed to accept a variety of instructions including add, subtract, print, load and store. This is similar to how modern web APIs interface with data, for example, “add blog post,” “delete blog post,” or “get blog post information.”

The functionality of EDSAC was documented via a catalog of notes about its functionality and how to integrate it with other programs. This was the first example of the type of API documentation we know today!

What is a web API?

A web API is a set of tools that allow web developers to send and receive instructions and data over an internet connection to web servers. Many of the modern websites and web applications we use today are powered by APIs. Think Twitter, Instagram, Facebook and your favorite shopping websites.

In modern web applications, front-end code does not interact with a database directly. Instead, the data is sent and received via an API layer. APIs act as a middle layer, or contract, between backend logic and database operations and the front-end application that a user interacts with.

So far, we’ve discussed how an API provides a middle layer to send data back and forth between backend databases and front-end applications. But what powers this data exchange? Let’s take a look at the foundation of data exchange on the web: HTTP.

A look at HTTP

HTTP — an acronym for HyperText Transfer Protocol — is a protocol that allows fetching resources, such as HTML documents and JSON data, over an internet connection. A protocol is defined as a system of rules that defines how data is exchanged within or between computers. HTTP defines a set of request methods that perform different actions when called. The most frequently used HTTP request methods are GET and POST.

As the verbs of the HTTP methods describe:

Other HTTP methods that we won’t explore in this post include PUT, DELETE, HEAD, CONNECT, OPTIONS, TRACE and PATCH. To learn more about HTTP in depth, check out this article on MDN.

Before we get started with looking into GET and POST HTTP methods, let’s go over some HTTP terminology.

In some HTTP methods, you will be required to send additional data inside a request body.

Successful HTTP responses will contain a response body that contains the data you requested via the API.

"case-insensitive-header-name": "value as a string"

When making a request to the Contentful GraphQL API, you will be required to send an HTTP header with the request as follows:

This header ensures that the web page is authorized to make the request to receive data from the API and is detailed in the relevant documentation. 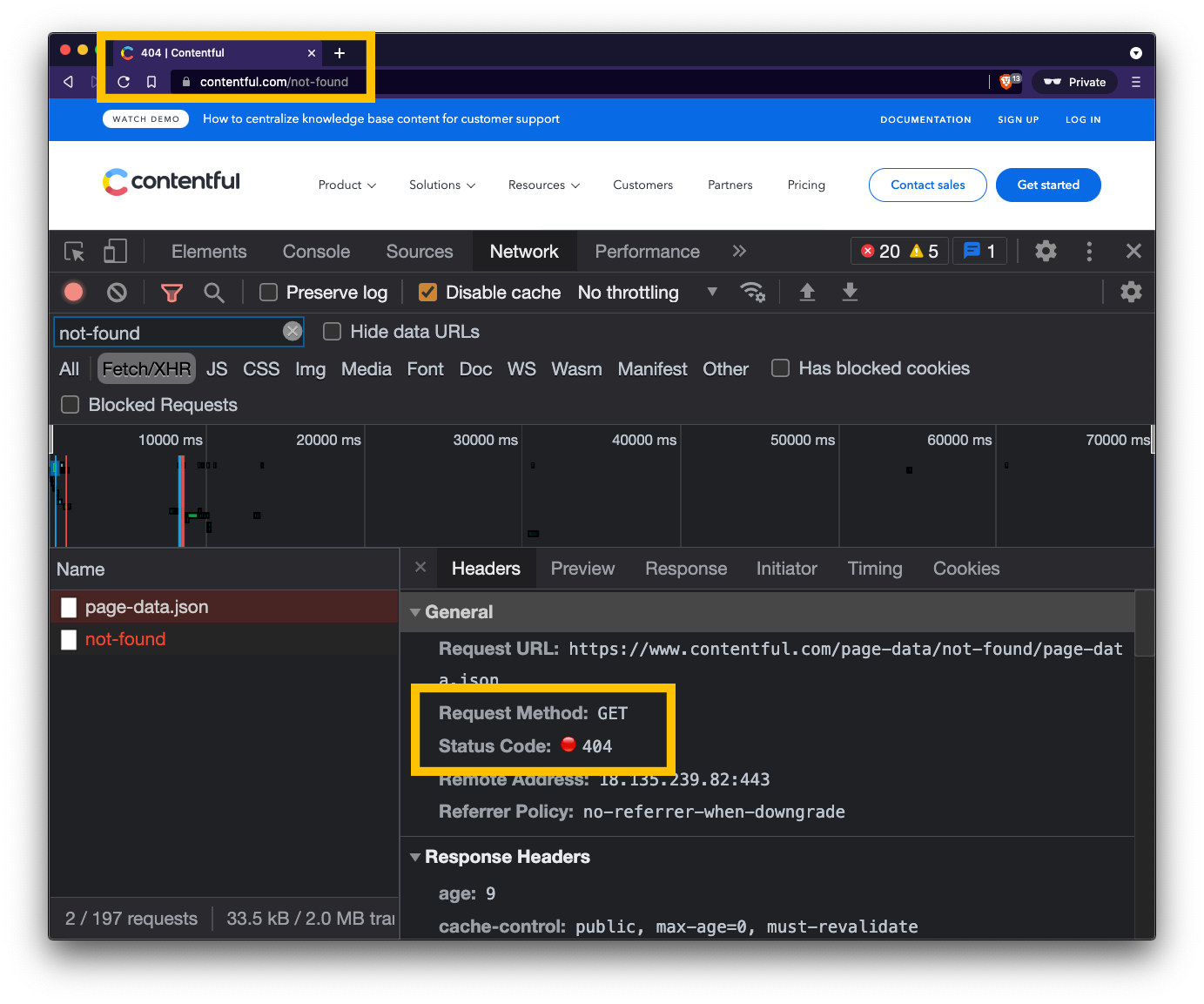 HTTP response status codes are delivered with HTTP responses as a number. When requesting data from the Contentful GraphQL API using fetch in JavaScript, the HTTP status code is available as a status property on your response.

The example code below requests the total number of blog posts available on my Next.js + Contentful starter blog. Notice the HTTP headers and request body sent with the request. When you run the code below, you’ll receive an HTTP 200 response, and 200 will be logged to the console. A 200 HTTP response code means the request was successful — and everything is “Ok!”

There are five groups of HTTP response status codes that are categorized by the starting digit.

Open the network tab in your browser and look for the 200 HTTP response status code for this web page. And if you’d like to explore a full list of HTTP response codes (including the silly response code 418 🙈), check out this article on MDN.

Now we’ve explored how you can send and receive with HTTP methods, let’s look at the two most common HTTP methods — GET and POST — in more detail.

An HTTP GET request allows you to retrieve data via a URL. GET requests do not send a request body with the call to the API.

The URL requires two pieces of data. The space_id, which is part of the URL, is the unique identifier of the space we’d like to get information about from the database. The access_token, which is a URL query parameter prefixed with ?, is an authentication token that tells the API that we’re allowed to make this request. This token will be verified by the backend when it receives the request. When you set up a Contentful space, you are instructed to generate an access token via the web app to communicate with the Contentful APIs. You may hear authentication tokens or similar credentials referred to as API Keys.

See the Contentful Delivery API at work by navigating to this URL in your browser: https://cdn.contentful.com/spaces/84zl5qdw0ore?access_token=_9I7fuuLbV9FUV1p596lpDGkfLs9icTP2DZA5KUbFjA

This particular URL requests information about the Contentful space that powers the Next.js starter blog using the appropriate space ID and access token. You should see the following data returned to your browser. The API has successfully returned the data you requested via the URL as JSON.

Here’s the same GET request above being made in JavaScript via fetch. GET is the default HTTP method in fetch, so it doesn’t need to be specified in the code.

Just as in the early example of the EDSAC, a good API has great documentation. API documentation describes the functionality of each API URL (or endpoint), how to send data in the correct format, and what data to expect from the API in return.

Here’s a screenshot from the Contentful Content Delivery API documentation, showing how to request information about a Contentful space. 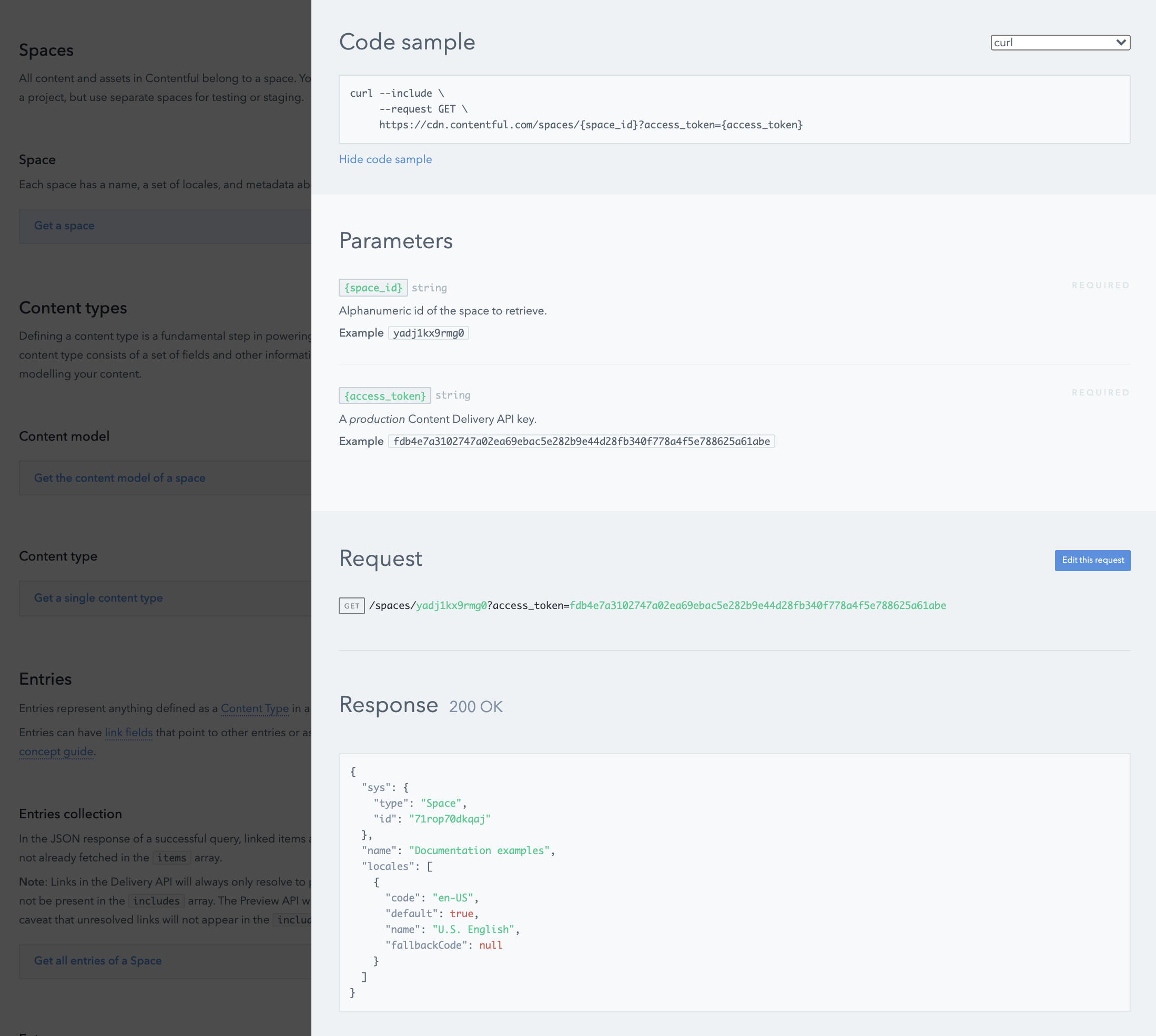 Notice that the documentation specifies:

The documentation also provides you with examples of how requests should be formatted in different programming languages and using different Contentful tools (such as SDKs and client libraries). Use the dropdown on this documentation page to see your options.

POST requests require data to be sent via the request body rather than as URL parameters. For this reason, POST requests cannot be made using the address bar in a browser. This makes POST requests more secure than GET requests, and should always be used for API operations that deal with sensitive data, such as sending a login request.

Here’s an example of a POST request using fetch in JavaScript. This example posts a request to the Contentful GraphQL API, asking for the total number of blog posts in the Contentful space with space ID 84zl5qdw0ore.

You may think it’s strange to request data by sending data — but GraphQL allows you to create, change and fetch data in a single HTTP call. That's why the POST method is the prefered way because you definitely don't want to update data with a GET request! This is also an example of sending extra HTTP headers with a request using JavaScript fetch (see authorization and content-type in the example below).

If you’d like more information on how GraphQL works (it’s pretty cool!) — check out our GraphQL video course on our developer portal.

Now you know what an API is, how APIs work over HTTP and what you send and receive via GET and POST requests, have a go at putting your knowledge into practice by exploring the Contentful REST API and Contentful GraphQL API using your preferred programming language.

If you’ve got any questions, come and join the Contentful Community Slack, where we’ll be happy to help you out.

And finally, if you’ve built something with Contentful that you’re proud of, submit your project to the Developer Showcase and share it with the world. Happy building!

Topics
GuidesGraphQL
About the author 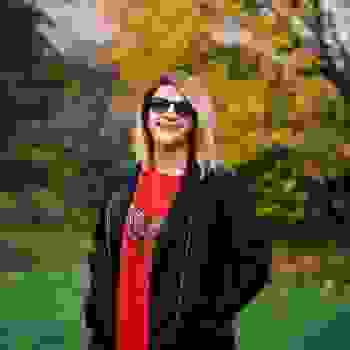 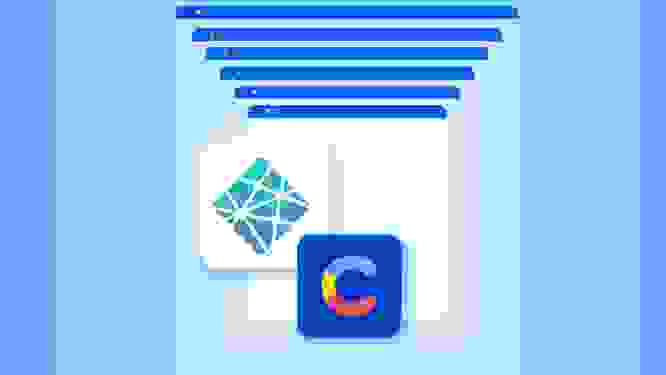 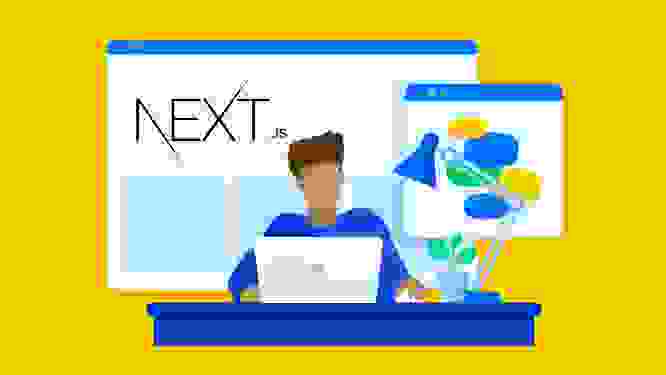