Note: Custom roles are an Enterprise only feature.

This document explains how to use custom roles and permissions – a feature that helps setting up different access to content for different groups of users. The document is divided further in four major topics:

Before getting started, following is a summary of the four main roles:

Note: Developer and Freelance roles have been deprecated in the current product version and are only available on select legacy plans.

How roles and permissions work

Before setting up Roles and Permissions for your project, it's best to fully understand the core concepts behind them and be certain of your actions.

The access to content is managed separately and independently in each space: Jack can have full ownership of space A, but be just a proofreader in a space B.

First thing you need to do is to identify distinct roles specific to the project. These are roles that you would set up later. Different roles imply different level of access to content.

For each role you would set up access to content individually. This is done by specifying what the user is allowed and not allowed to do. The access is specified by:

The most important aspect is everything which is not explicitly allowed is denied. Here's an example: if you've enabled editing entries, but didn't enable reading them, then the user won't be able to open the entries. Even though it might feel counter-intuitive, this way of handling access rights helps preventing unsolicited access: when you set up everything explicitly, there is no chance of accidentally giving someone access to something they shouldn't have.

How to manage roles from the Web App

There are six actions that can be restricted:

Roles must be given explicit permission to read content items such as assets or entries. This means it's very possible to set up a role that is allowed to create or edit entries, but since they cannot read them, effectively won't be able to do anything. Items which a user does not have permission to read will be hidden in the entry list. When an entry the user can read contains a link to an item the user cannot read, they will be shown a warning the item either doesn't exist or can't be shown to them.

A user who cannot change content may still be able to see it, but in a read-only state. Editing can be restricted not only to content types, but also to individual fields or languages.

This rule can be restricted to a particular content type, for example to allow users to create new posts but not new categories.

Note that Contentful requires content to be unpublished before deletion. This means a role that can delete content but not unpublish, can only remove drafts.

Assigning a role to a user

Note: it is possible to change your own role (and thus lose permissions to update roles any further). It is even possible make all users in a space non-administrators. If this happens and you wish to restore administrative privileges in the space, you can do so under your account settings.

How to manage roles programmatically

It is possible to create and manage roles programmatically with the Content Management API. To get started, refer the guide.

One writer, one translator, one editor: setting up a bilingual project with Contentful

Objective of this example is to create three different roles - editor, writer, and translator. Also, set up appropriate access controls for each of them.

The previously used emojis example is referenced in this case. 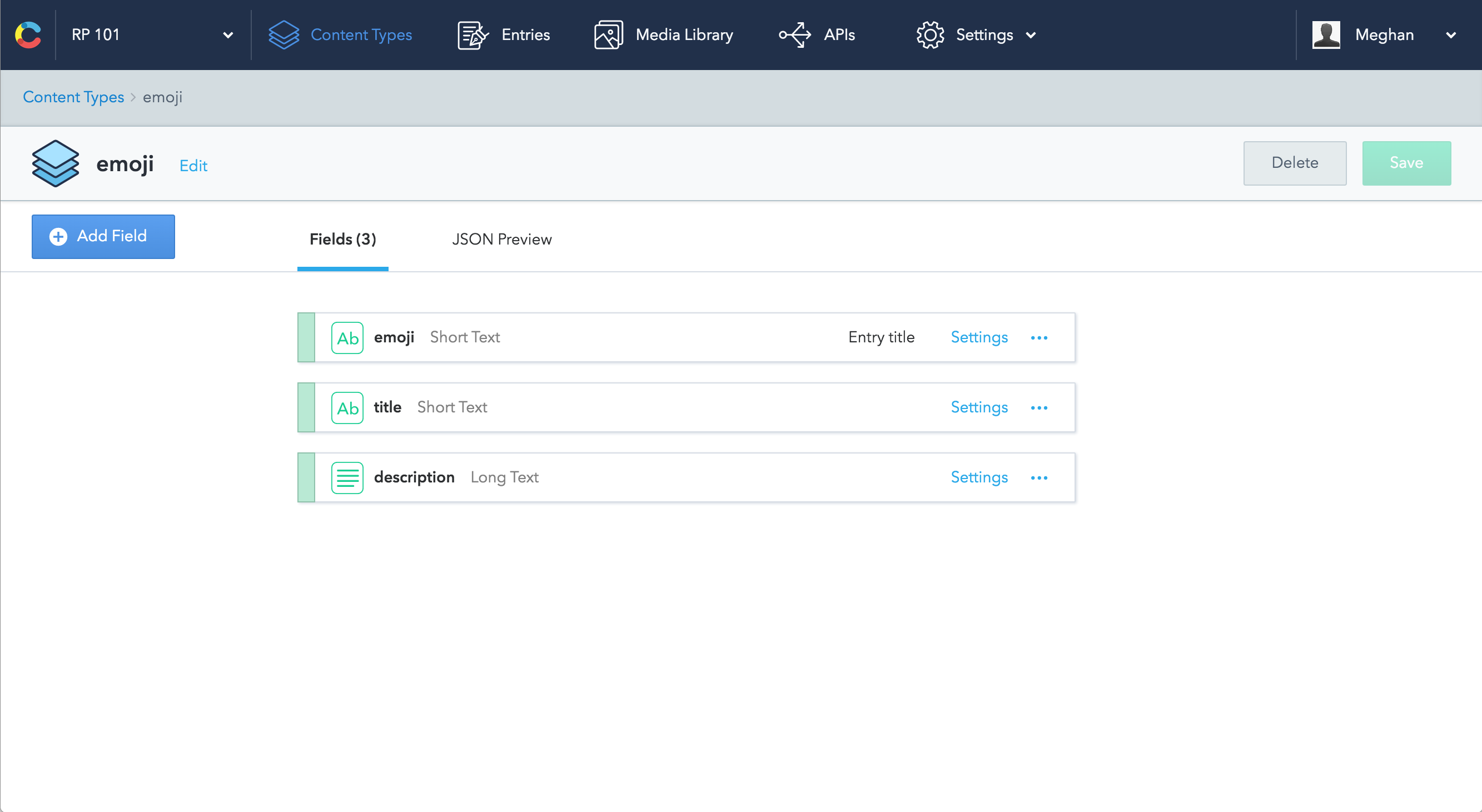 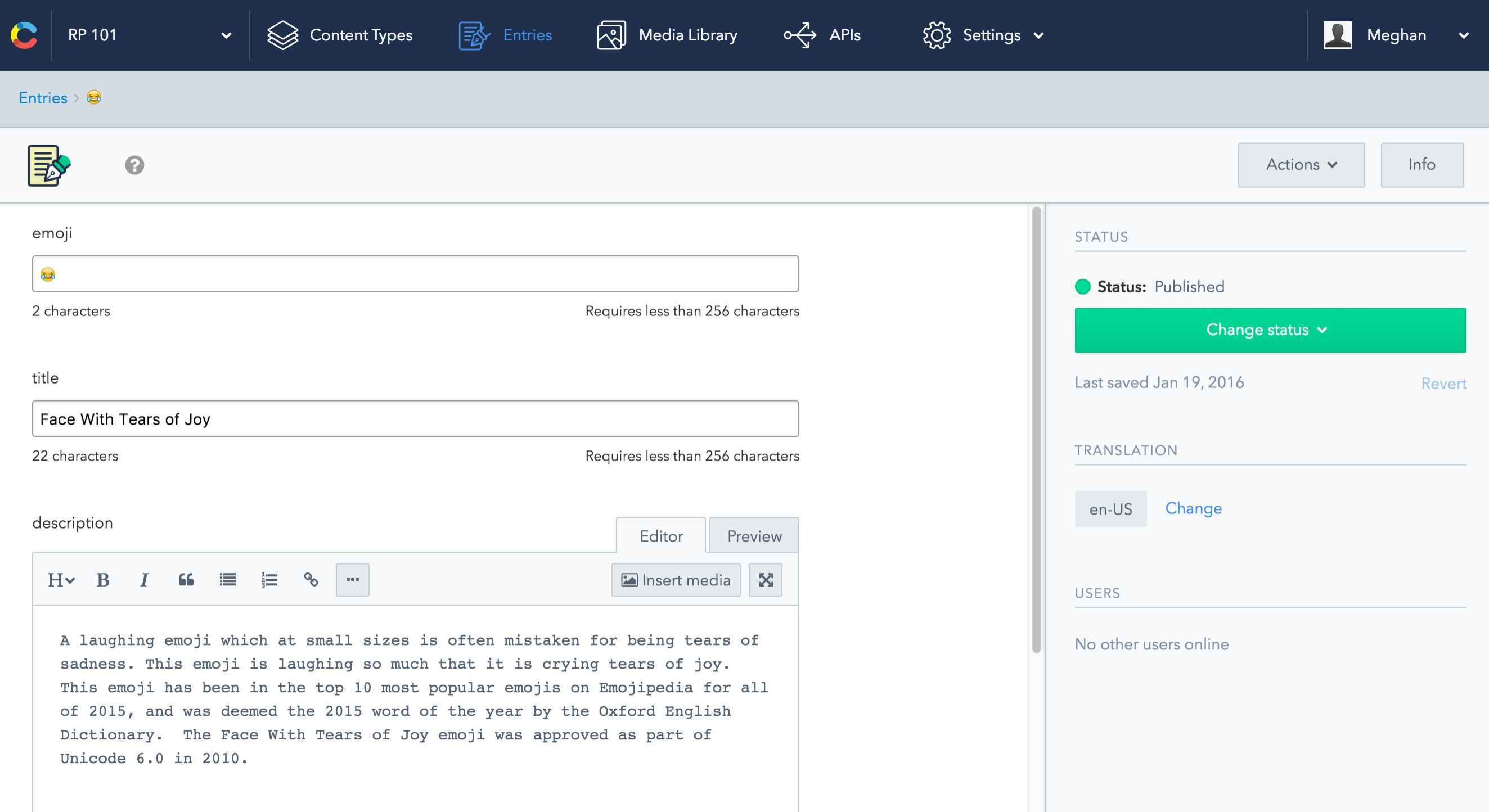 Note: An Administrator or Owner of a space can manage roles and permissions.

Click Settings at the top bar, and open Roles. This is where everything related to roles is set up. 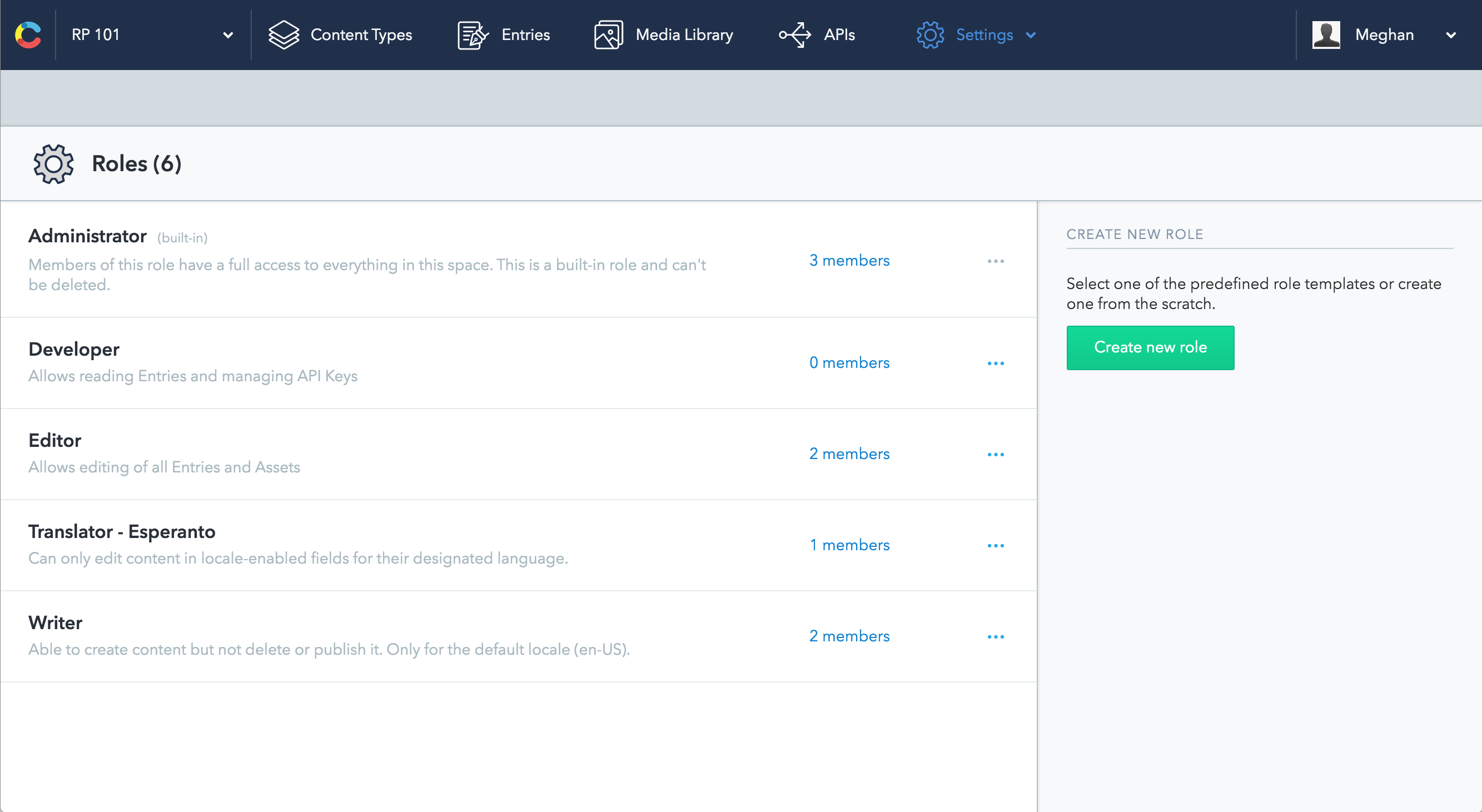 Administrator, Developer and Editor are the roles set up by default. 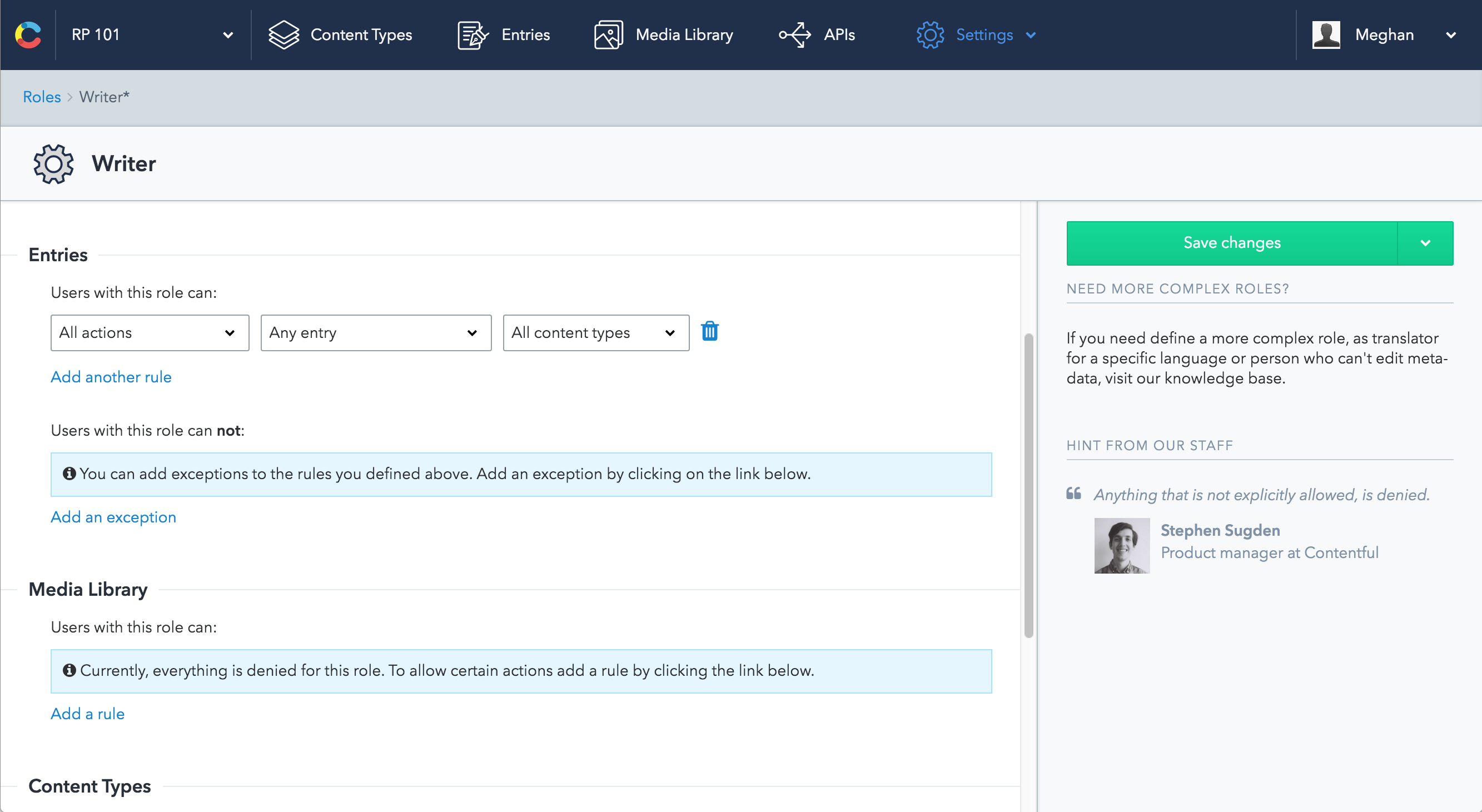 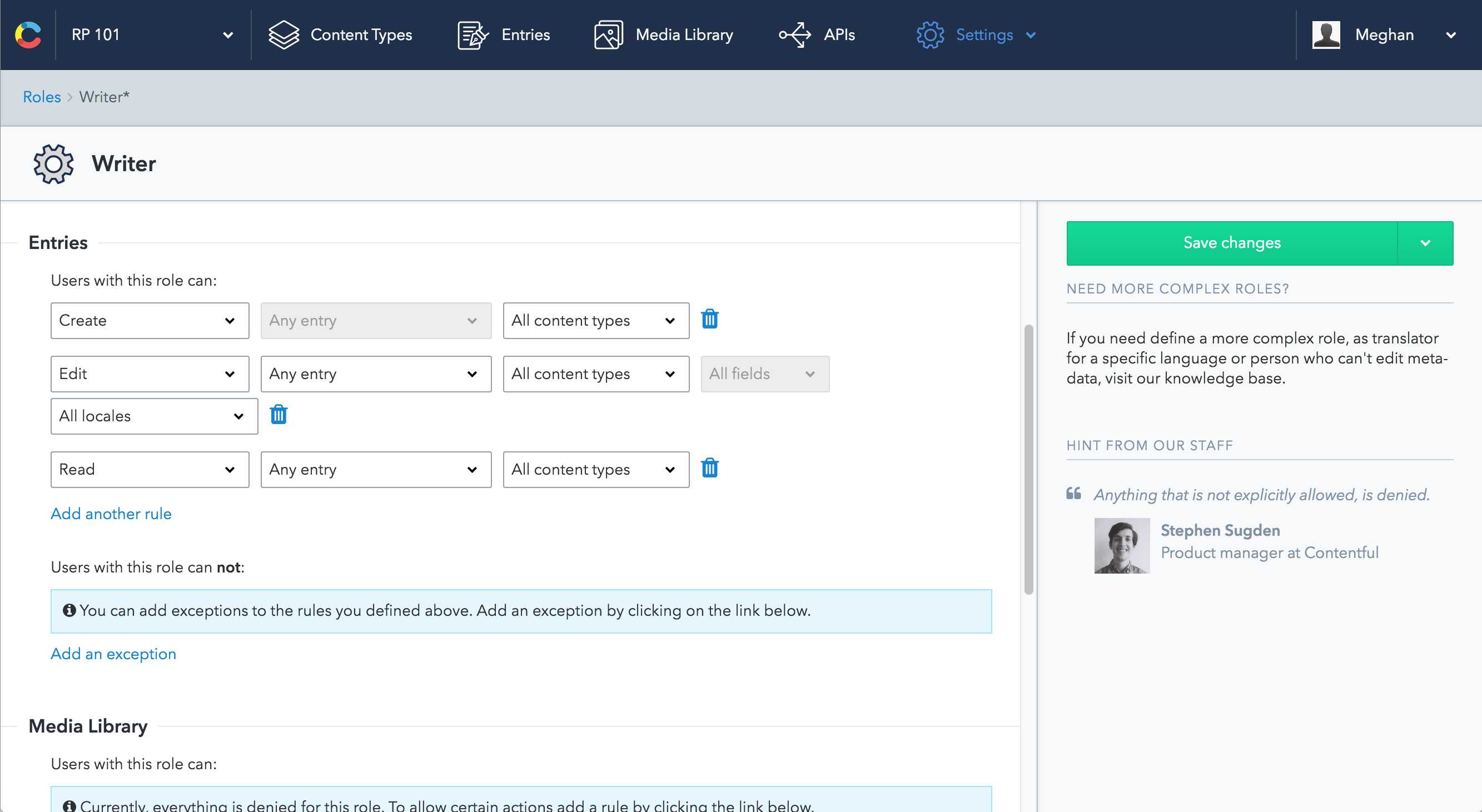 The Writer role is created with the access to create, edit and open entries. 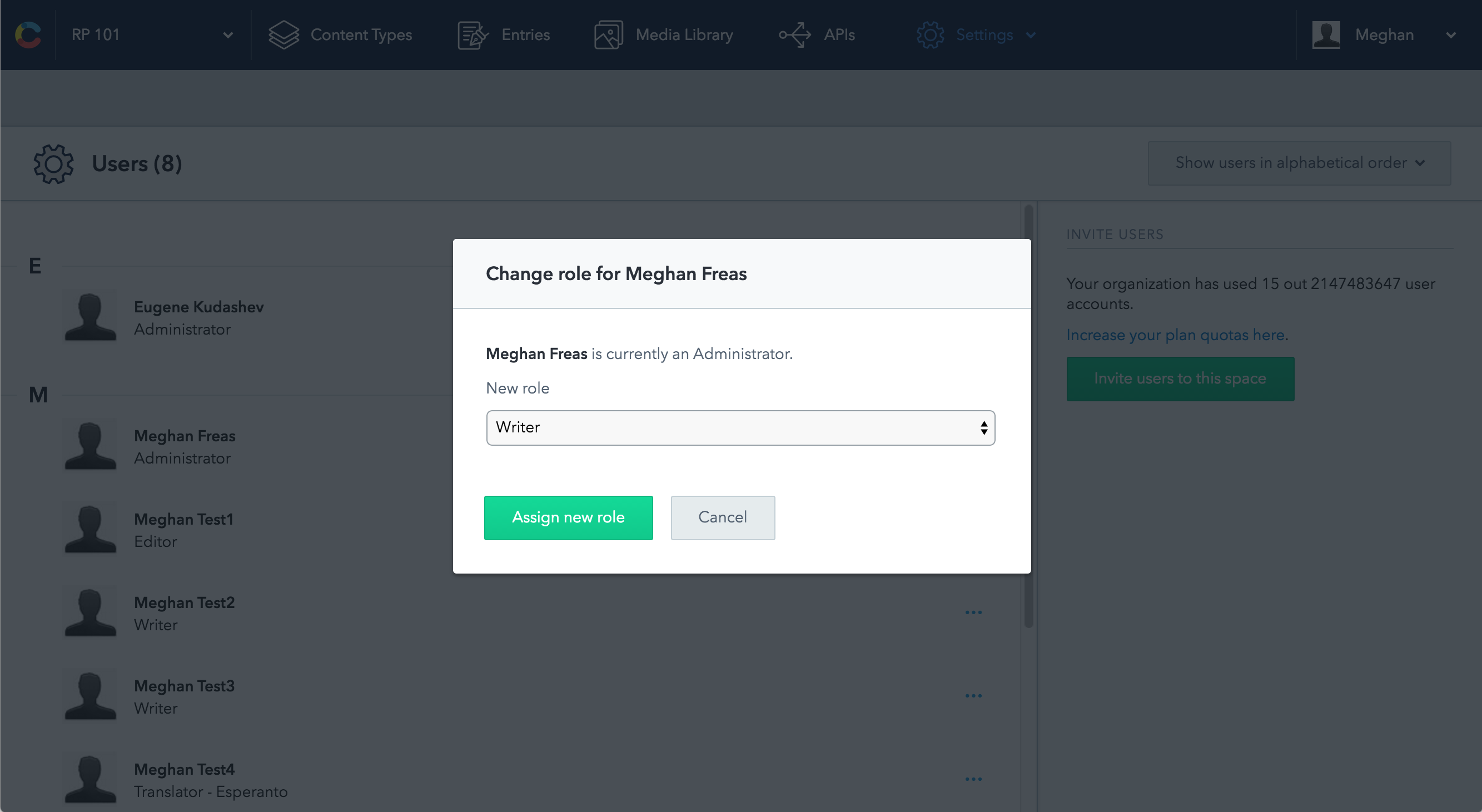 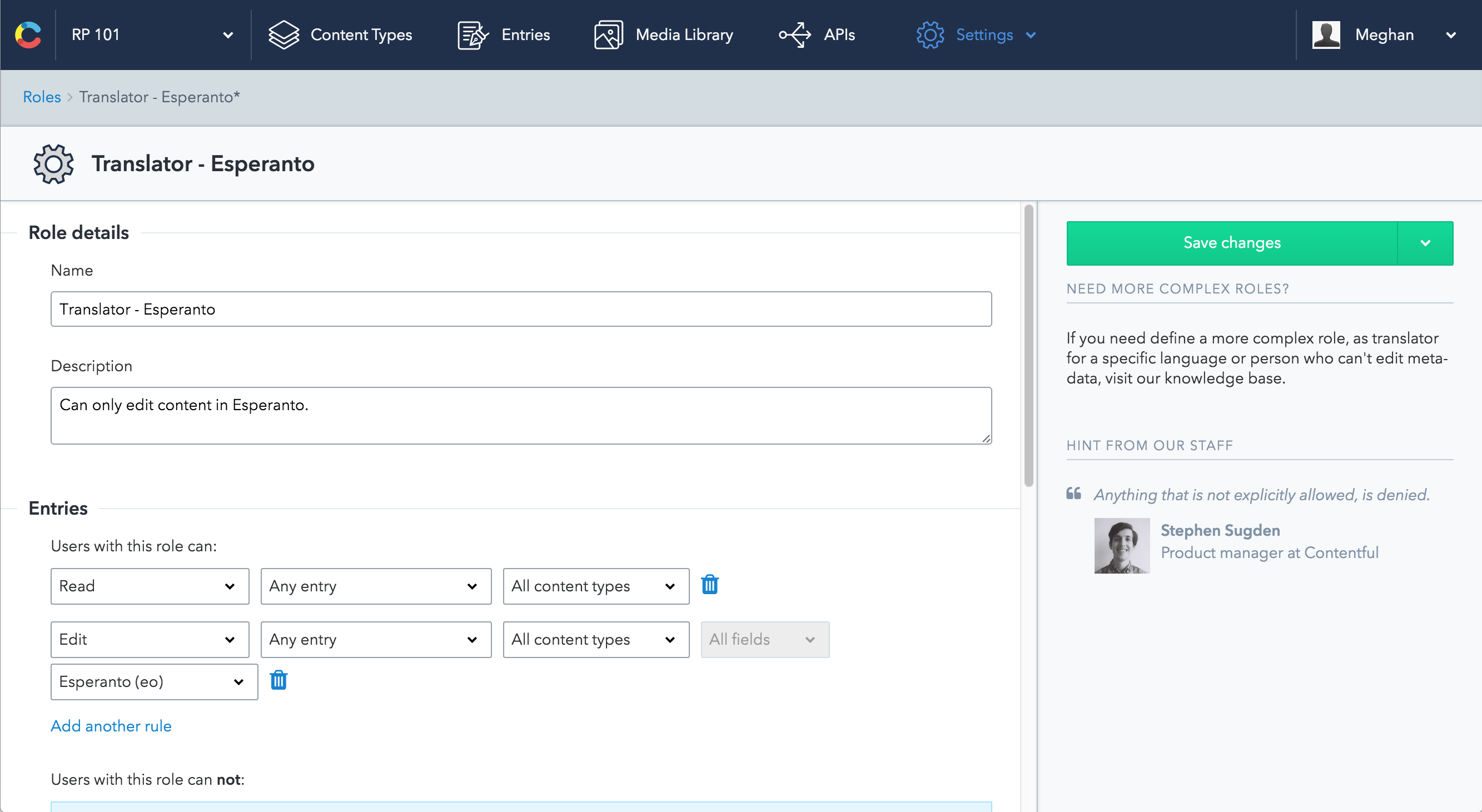 There is an editor role which comes by default – you can just open it and make sure that the editor is indeed able to do anything that they want with the entries.

For now the only way to make sure that the rules you set up have the effect you expect is to actually log in under each user and see how the interface looks.

Here is how the list of entries and one opened entry looks for different users. 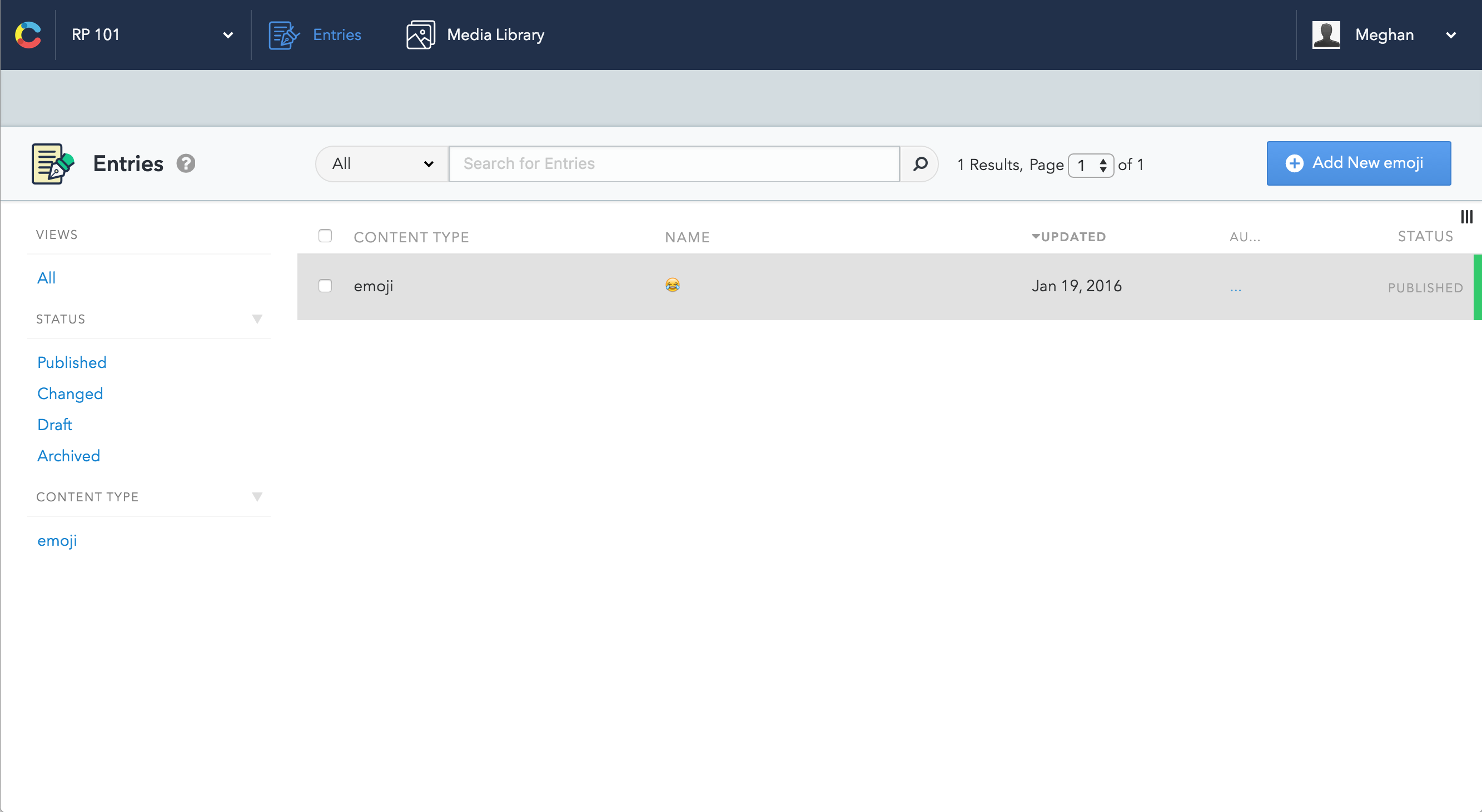 List of entries, editor's view: they can create entries. 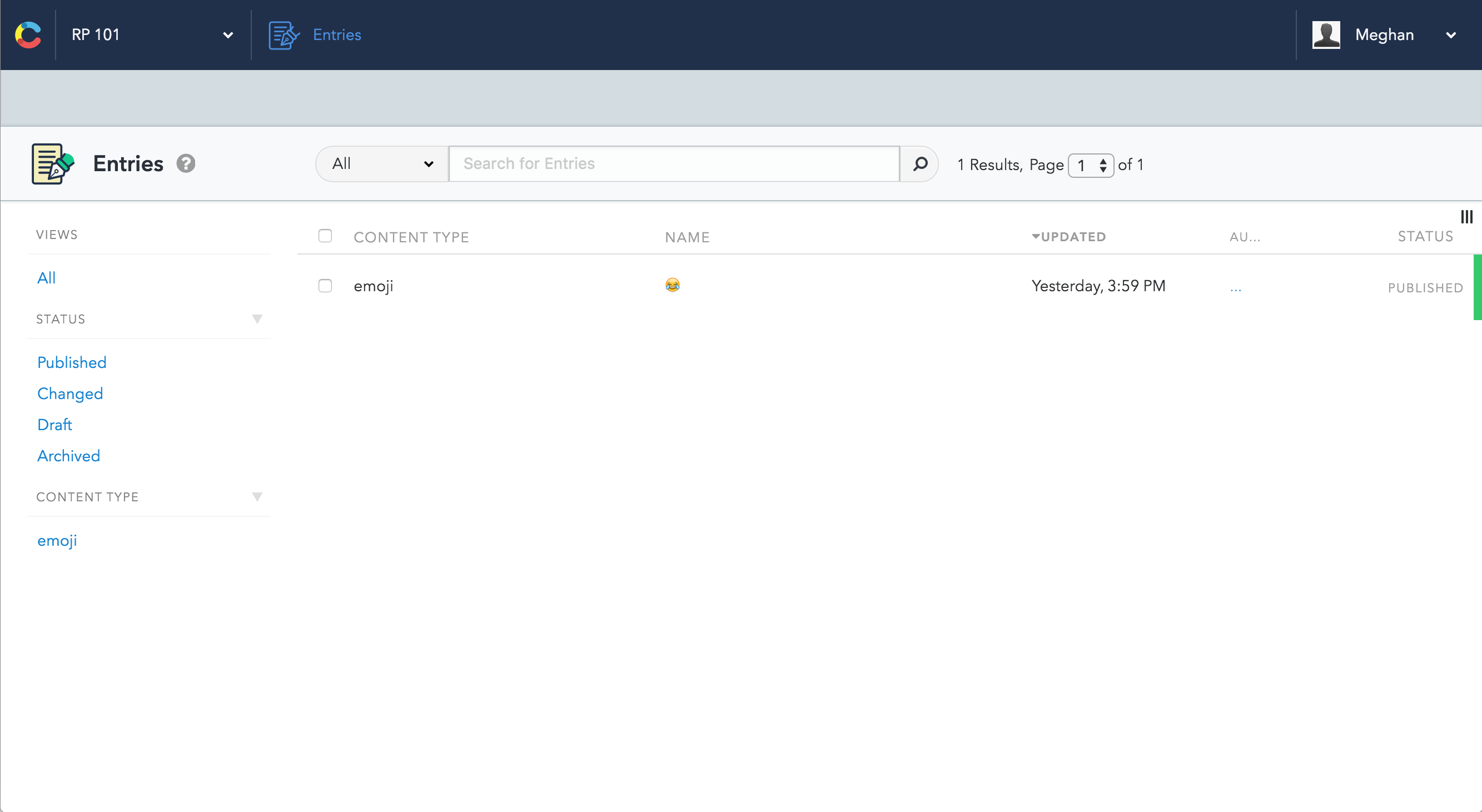 List of entries, translator's view: they can't create entries, but can open the existing ones. 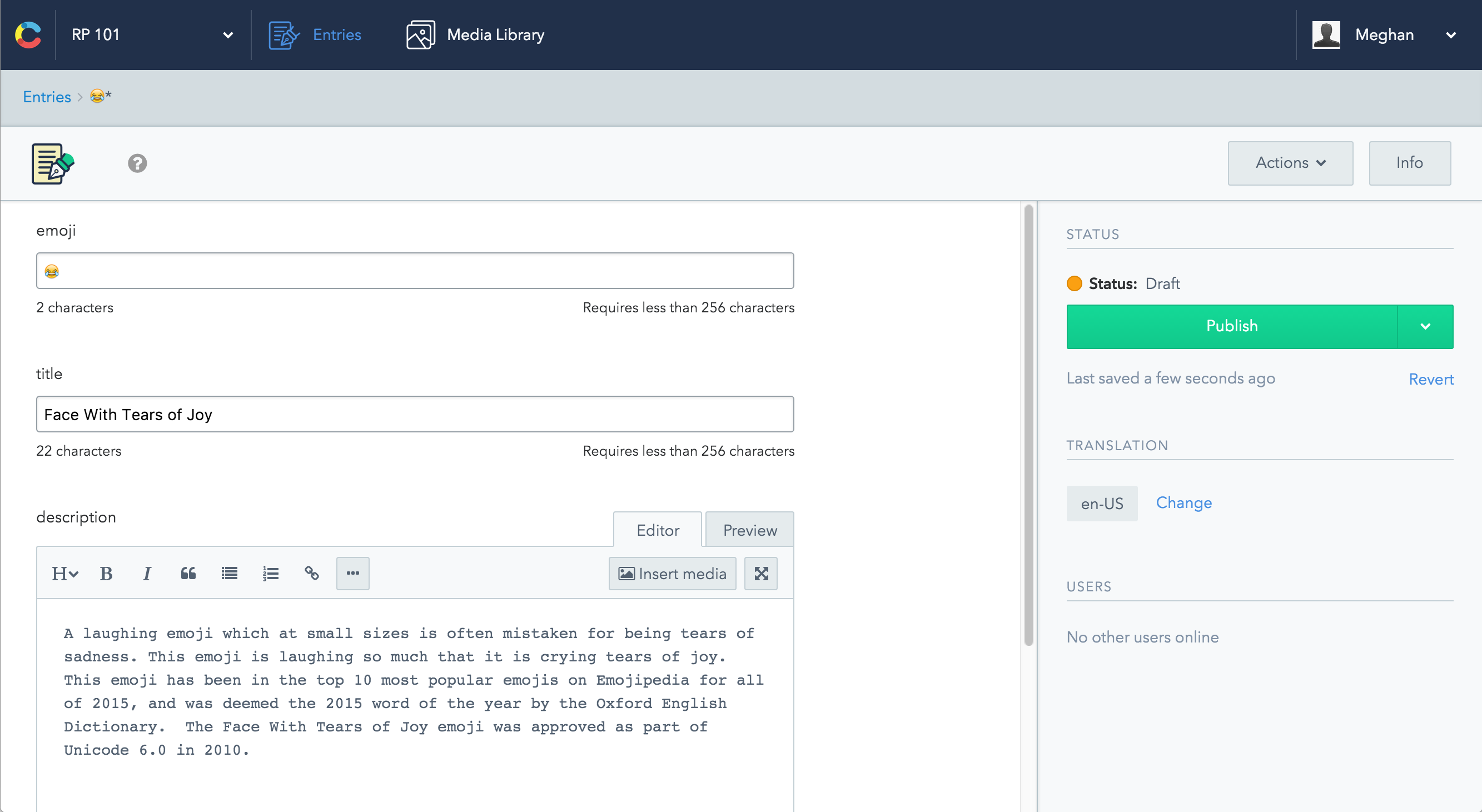 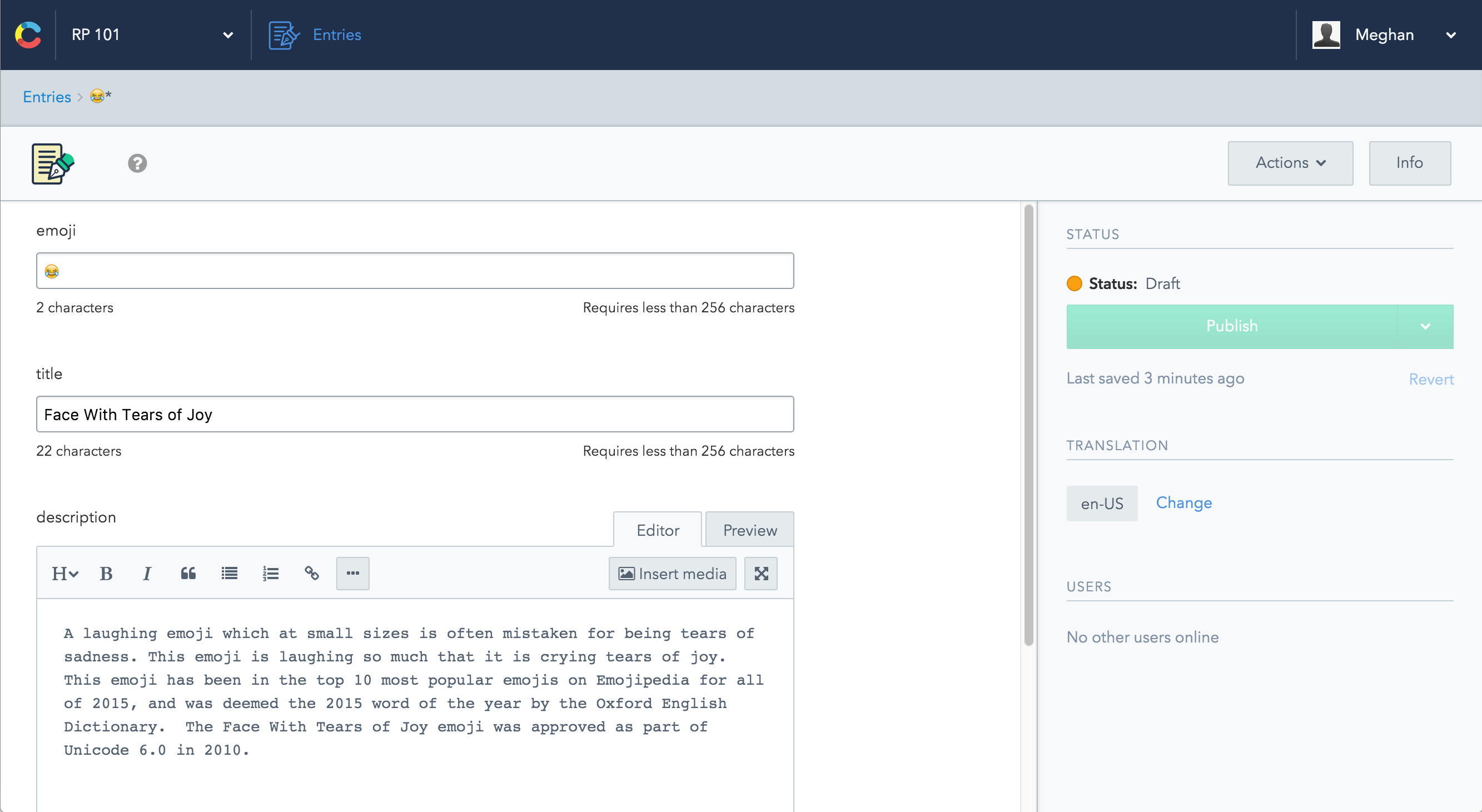 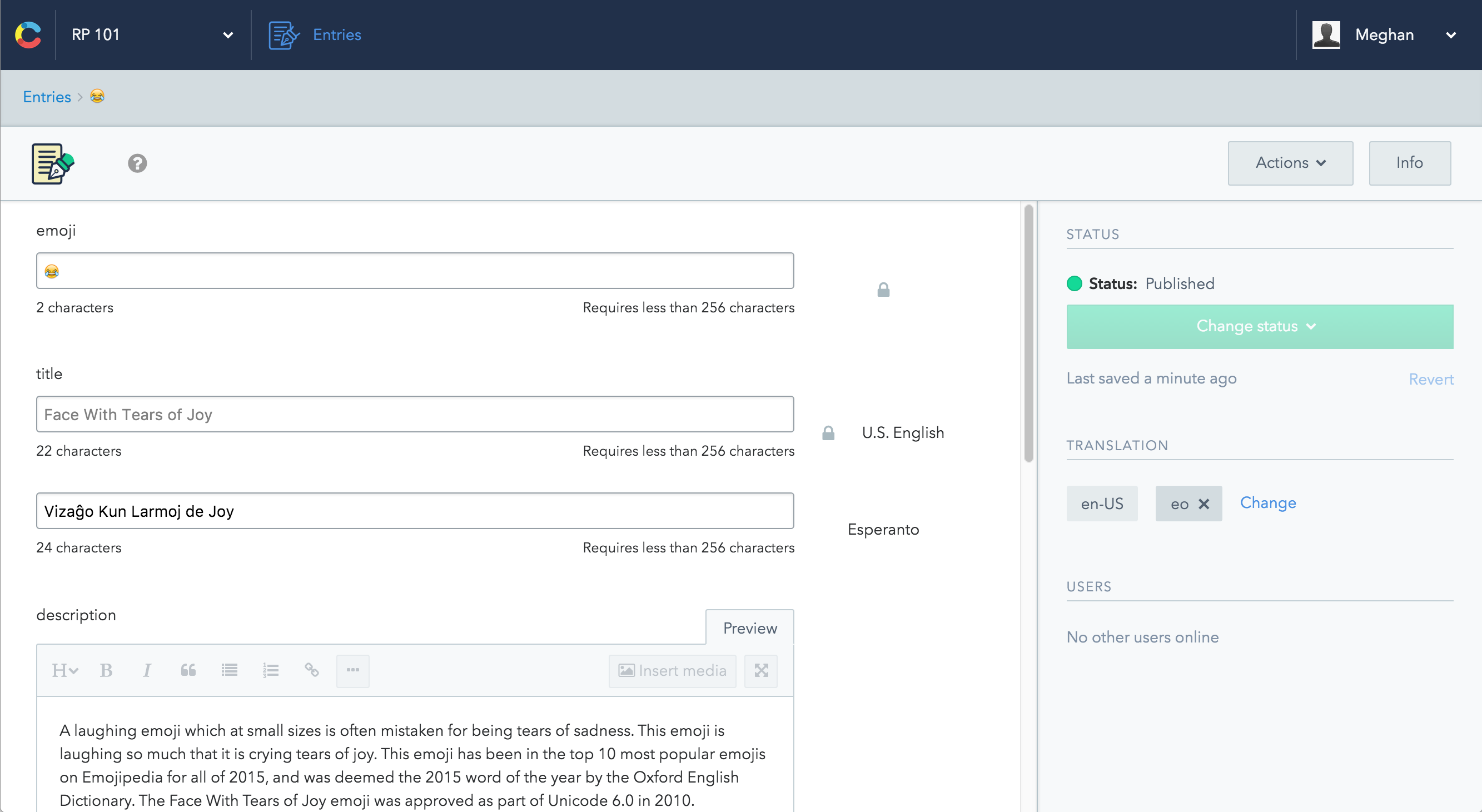 Opened entry, translator's view: the Esperanto fields are editable, whereas the English ones are not.